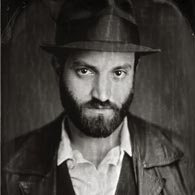 born in Detroit, studied theater and poetry at University of Michigan. After living as a songwriter in New Orleans and New York he moved to Berlin in 2005 and founded his band The Painted Bird, which went on to tour the world and win several awards with their 4 albums. He’s a founding member of the bands The Brothers Nazaroff, The Unternationale, and The Disorientalists. At Berlin's Maxim Gorki Theater he works as a director, actor, composer, playwright, and music curator. He recently performed as Biff in the critically-acclaimed Yiddish production of Death of a Salesman at New York's Off-Broadway Castillo Theater. He has taught and performed in every corner of the Yiddishe Velt from California to Moscow.