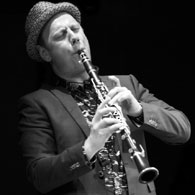 is a clarinettist, composer and bandleader. Born in 1983 he started playing drums at an age of 8, but soon fell in love with the woodwinds. When he was 9 years old, he was admitted in The Tivoli Boys Guard on the clarinet, where he took his first steps in his professional career.

Emil Goldschmidt is trained in both classical music and jazz/pop, but the old recordings of the Yiddish masters, David Tarras, Shloimke Beckerman and Naftule Brandwein, showed him his musical path. He quickly discovered his own voice in Yiddish music leading him to establish Mames Babegenush. Rooted in East European Jewish dance music Mames Babegenush has dazzled both audience and critics, which has lead up to concerts in more than 12 countries.
Some of the highlights in his career is being selected for the “Young Artist Program” in Carnegie Hall and the participation in “The 2nd Jewish Music Competition”, where Mames Babegenush, as the only band, won 3 prizes, including the much appreciated “Audience Prize.”