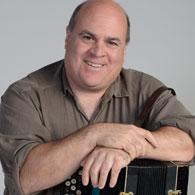 the founder and director of the ensemble Budowitz, a founding member of Veretski Pass and has performed and recorded with Itzhak Perlman, The Vienna Chamber Orchestra, Theodore Bikel, Ben Goldberg, Rubin and Horowitz, Brave Old World, Adrienne Cooper and Ruth Yaakov. His music was recently featured in the British film, Some of my best friends are... Jewish / Muslim, and is also featured in the new film by Jes Benstock, The Holocaust Tourist.

His recordings with Veretski Pass, Budowitz, the Vienna Chamber Orchestra, Rubin & Horowitz and Alicia Svigals, have achieved international recognition and he is the recipient of more than 40 awards for his work as both composer and performer.

He was one of the co-founders of the Austrian experimental composer collective, Die Andere Saite and received the Prize of Honor by the Austrian government for his orchestral composition, Tenebrae. Following his children’s Opera, Der Wilde Mann, Joshua received The “Award for Outstanding Talent in Composition” by the City of Graz where he also taught at the Graz Academy of Music.

Joshua taught Advanced Jazz Theory at Stanford University with the late saxophonist Stan Getz and is a regular teacher at KlezKamp, Klezmerquerque, KlezKanada, KlezCalifornia and the Klezmer Festival Fürth. His musicological work is featured in four books, including The Sephardic Songbook with Aron Saltiel and The Ultimate Klezmer, and he has written numerous articles on the counterpoint of J.S. Bach.