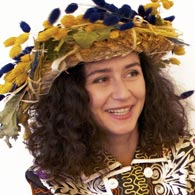 was born in Siberia and grew up in a home where songs were regularly sung at a family table. Her singing is deeply rooted in east European folk. Growing up in Tatarstan also placed her close to Islamic ornamentation and timbre which forms a unique vocal style.

When living in Kazan, Tatarstan, and studying at the State Academy, she joined Russia′s first klezmer band after Perestroika, Simcha, 1990-2000. She soon became the principal Yiddish choir leader of the former Soviet Union, composing original material and touring internationally with her Quartet Ashkenazim, 1991-2007.
One of Polina’s current collaborative projects is Sklamberg &The Shepherds which brings the world of traditional and newly composed song blended with Klezmer and Mediterranean Music. Their CD Aheym/Homeward was released in 2015. She also works with Merlin Shepherd - the duo have a reputation of “The Led Zeppelin of Klezmer” (Seth Rogovoy, author - The Ultimate Klezmer). As solo performer she presents a variety of original songs including her solo CD Three Centuries Ago, 2014.

Polina’s choir work is united by the umbrella of The Polina Shepherd Vocal Experience and covers aspects of vocal music from large scale choral improvisation or highly arranged pieces and chamber groups. She currently leads four choirs in the UK and teaches internationally. Her specially developed choral methods are based on specific East European stylistic details, modal experimentation with attention to history and context.