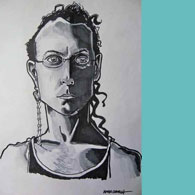 is a cultural worker and organizer, working in a wide range of puppetry, movement, and spectacle performance forms since the 1990s. Can’t stop picking things up on the street and making other things out of them – outfits, collectives, cabarets, barricades, meals… Never figured out how to make art for art’s sake; rarely wants to work alone. Third-generation radical; second-generation dyke: just another oysterlish gendertreyf apikoyrus mischling diasporist four-eyed fem who identifies with, not as.