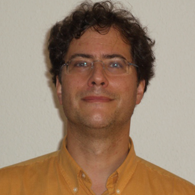 has been Professor of Yiddish Studies - "Jiddistik" – at the University of Trier in Germany since 2002. He was born in 1961 in Casablanca (Morocco). He became interested in Yiddish in his youth while learning German (and English) as foreign languages. After studying languages, he was trained as a conference interpreter in Paris III (Sorbonne Nouvelle) and graduated from “ESIT” in 1986. Following his formal studies in Yiddish in Trier (promotion 1995, habilitation 1999) he published (mostly in German and Yiddish) on the history of the Yiddish language and literature and on modern Yiddish language and collaborated to dictionaries of modern Yiddish. He co-organizes (with Marion Aptroot, chair for Yiddish in Düsseldorf) the yearly "Symposium on Yiddish studies in Germany" which attracts an international audience. Simon Neuberg has three children, whose first language (mame-loshn) is Yiddish.