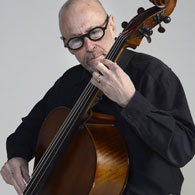 has been an accomplished performer, arranger and recording artist in the ethnic music field for over 50 years. A founding member of Los Angeles' Ellis Island Band, he has been a moving force in the klezmer revival since its beginning, and has defined klezmer bass (“It’s a large instrument that plays really low and has an accent.”)
He holds a B.A. in music with a concentration in Ethnomusicology from the University of California at Los Angeles, and has taught at KlezKamp, Buffalo on the Roof, the Balkan Music and Dance Workshops, Klezmerquerque, KlezKanada, KlezCalifornia, and numerous European festivals and institutes, including Oxford University, Klezfest London, Yiddish Summer Weimar, Klezmer Festival Fürth, and the Krakow Jewish Festival.

Stu has been recording, touring, and teaching New Jewish Music with world class ensemble, Brave Old World since 1989, and is featured in the PBS Great Performances film and CD, Itzhak Perlman: in the Fiddler’s House, and in the 2010 documentary, Song of the Lodz Ghetto, with the music of Brave Old World.
Long admired as a versatile soloist and sensitive accompanist in traditional and pop music circles, he has toured and recorded with Canned Heat, Kaleidoscope, and Geoff and Maria Muldaur, and played cimbalom on Ry Cooder’s celebrated recording, Jazz, which premiered at Carnegie Hall.