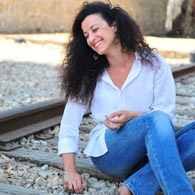 Soprano Svetlana Kundish began studying music when she was seven. In 1995 Svetlana and her family settled in Israel, and she continued her music studies in the Ironi (Municipal) Arts High School in Tel Aviv, concentrating on voice and piano. After graduation she began intensive voice training with Ella Akritova and to study Yiddish music in the master class of Nehama Lifshitz. From 2003 to 2007 she studied musicology at Tel Aviv University, where she was awarded a BA diploma. Svetlana was a member of The Group for New Music in Israel which is devoted to music from Terezín and pre-war works by composers who were active in the ghetto. In 2007 she decided to continue her vocal studies in a professional institution abroad and graduated in 2011 from the Prayner Konservatorium in Vienna. She continued her studies at the Cantorial Department of the Abraham Geiger Kolleg in Berlin.
Svetlana Kundish performs all over Europe in solo concerts dedicated to a variety of Jewish Music styles as well as with her projects The Voices of Ashkenaz, Kol Ishe, Wien-Erfurt Klezmerbrücke, Duo with Patrick Farrell, European World Music Ensemble and other projects and bands. In December 2008 Svetlana won the first prize at the international vocal competition The Golden Hanukkah in Berlin.
In August 2013 Svetlana sang at the Diwan der Kontinente Project, as a part of The Nights Of Ramadan Festival and was invited to KlezKanada Festival. In September 2013 she performed at the Festival of New Yiddish Song in New York. In November 2013 Svetlana was invited to perform at the Erich Maria Remarque Peace Prize ceremony in Osnabrück. In July 2015 she gave a concert in Paris at the Third Ladino Summer School by “Aki Estamos AALS”.