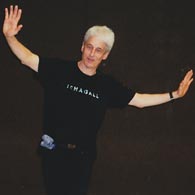 began folkdancing in Europe at the age of 10, and has been teaching international folkdance in both Europe and America since 1972. Andy Statman played klezmer music at his wedding in 1981, prompting him to search for the dance form that once went with this music, a search that led him to Michael Alpert and the first klezmer dance workshop in Buffalo Gap, WV in 1993. Michael and Erik then co-taught a weeklong seminar on the relation of klezmer dance to neighboring East European dance forms, and have often collaborated since. Erik choreographed a suite of klezmer dance for the Westwind International Folk Ensemble in San Francisco, and has taught klezmer dance for synagogue communities and at folkdance camps worldwide. In 2005, he helped Cincinnati choreographer Fanchon Shur create her Jewish dance theater piece "Lebedike N’shomah." In 2007, he taught and introduced video documentation of Yiddish dance teaching to the Yiddish Summer Weimar workshops in Germany, and helped instigate the Yiddish Dance Research Symposium put on by the Center for Traditional Music and Dance. Erik Bendix is a grandson of a Dachau survivor and a long-time participant in the Jewish renewal movement. His dance interests embrace Appalachian clogging, Chinese internal martial art forms, dervish whirling and Balkan village dance collected on trips to Bulgaria and Macedonia. A serious student of the sciences of human movement, Erik Bendix has a private practice as an AmSAT certified teacher of the Alexander Technique and a certified practitioner of Body-Mind Centering©.