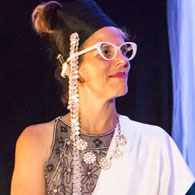 has been imagining, re-imagining and realizing the revolutionary possibilities of New (Yiddish) Theater in the service of social justice, radical resilience, and beautiful struggle for more than 30 years. She is a founding member of Great Small Works, a collective of puppet theater artists drawing on folk, avant-garde, and popular theater traditions to address contemporary issues and keep theater at the heart of social life. She is also the music director of Jennifer Miller's Bessie and Obie Award-winning traveling circus, Circus Amok.

Collaborating with composer Frank London of the Klezmatics and with Adrienne Cooper, Jenny conceived, directed, and performed the musical theater adaptation of The Memoirs of Glückel of Hameln in 1997-2001. She was featured in Hans Peter Lischter & Christian Marclay's sound opera “Do Chinese Postmen Ring Twice Too?” and choreographed and performed in Gregg Bordowitz's film adaptation of “The Suicide”.
Jenny directs the singing spectacle troupe called the “Sukes Mob” (punk Jews), and collaborates with Chinese Theatre Works other older and younger artists from all over the globe. In 2002, along with Adrienne Cooper (z"l) and others, she founded Jews For Racial and Economic Justice's annual radical Purimspil now in the capable hands of the Afselokhes Spectacle Committee. Jenny has directed community-based spectacles with the Lesbian Avengers, at Klezkanada (Montreal), in Bariloche Argentina, in NYC public schools and on Riker's Island, a prominent NYC Jail.  As artist in residence with “Milk Not Jails” Jenny tours La Ciudad, the magic box of New York City with Copper Hennigfield, "the world's greatest magician".

Romaine studied folklore and performance with Dr. Barbara Kirshenblatt-Gimblett at the NYU's department of Performance studies, and was an archivist at the YIVO for Jewish Research for 13 years.  In 2015 she received the “Rabbi Marshal T. Meyer Risk Taker Award” from JFREJ, and was the first recipient of the “Adrienne Cooper Award for Dreaming in Yiddish” (2013) an honor she hopes to live up to.

As the author and activist Ezra Berkley Nepon, has put it, Jenny’s uses "dazzle camouflage" to make work that is "weird, radical, and super-queer, but it’s also accessible. It is fabulous to behold, the music is exceptional, and it happens where people are congregated – on the streets, at gatherings, protests, community centers, prisons, schools – and all of this allows her to create spaces for people who share her politics to find each other and see our truths shared, while also creating opportunities for wider audiences to hear the messages and join the fun (and the movement)."