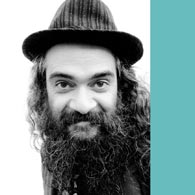 Pavel Lion, a.k.a. Psoy Korolenko, is a Moscow based singer/songwriter, translator, scholar and journalist. He has been referred to as a ''wandering scholar'' and an ''avant-bard''. His multilingual one-person cabaret-esque show balances folk and klezmer music, free-style poetry and intellectual comedy. Psoy writes and sings in English, Russian, Yiddish, and French. On stage since 2000, he has published one book of selected essays and song lyrics ''The Hit Of The Century'', and 14 CDs – some of them in collaboration with active Jewish and Klezmer musicians ("Opa!", Daniel Kahn, Igor Krutogolov, "Oy Division"). Psoy is a member of the organizing committee for a Russian American music festival JetLAG, a guest of many klezmer music festivals, and an ex-artist in residence at the Trinity College (Hartford), University of Michigan (Ann Arbor), Dickinson College (Carlisle, PA). An author of insightful and sophisticated Russian sung poetry, Psoy is also known for his keen and explorative vision of the art of translation, “tradaptation” and what he calls Spell-Art (i.e. playing with foreign text, emphasizing linguistic distances, multilingual songs etc).