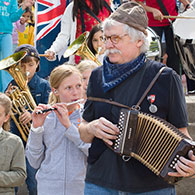 Stefan grew up in California hearing his parents' choice of Polish-American polka music and early jazz. In the 1970s he studied classical and jazz music on tuba and saxophone. His maternal grandfather was a dance fiddler in North Dakota and Minnesota and in 1982 Stefan picked up a violin and began exploring those family musical roots.
His search led through an American-immigrant pastiche of English, Irish, Mexican, French and French-Canadian, Klezmer, Hungarian, Romanian and Gypsy, until 1997 when he lived for three tears in Kraków. There he was able to learn first-hand the roots of his Polish-American family music, in villages of the Carpathian mountains and central Poland. At the same time he was able to realize a life-long ambition to study and learn musical instrument building.
Since 2000 he has been an ambassador of Polish traditional music in America and China, recreating village instruments and music of Central and South Poland. His paternal roots in Łęczyńskie and Kujawy have recently led to a fascination with Harmonia Polska, a uniquely Polish early accordion. He has also thought and studied deeply the connections and distances between "Polish" and "Jewish" traditional music of central Europe.
In America, Stefan was told by ethnic Poles, "There is no such thing as a 'Polish Jew'!" He begs to differ, feeling himself to be the even more confusing, American-born Polish Jew. After working the usual array of uninteresting jobs to support his musical passion, Stefan is currently Musician-in-residence at the Inter-community School in Zürich, where he inspires and teaches children to love instrumental music of all kinds.